Call me old fashioned, but I’ve always liked the pre-Internet romanticism of reading the paper, opening it up with the dramatic movements of an orchestra conductor, scanning through the world’s personal log of events, and placing it neatly under my cereal bowl for further inspection. I get it, though: no one has time for such an extended, ceremonious process anymore. We’re a generation of multi-taskers. And it is much more difficult to check your email, Facebook, Twitter, and whatever you might be actually working on, while having sections of the paper sprawled around you, than if you were just opening another tab on your Internet screen.

So, it is really no surprise that, in 2008, for the first time, more people said they get their national and international news from the Internet than from newspapers (see here, for more stark statistics on the newspaper’s future). The issue is not just that one day I’ll have to permanently adjust my eyes to reading from a screen, or work on not spilling Reese’s Coco Puffs on my laptop, but that online journalism has opened a huge can of worms for the question of citizen journalism, redefining who can deliver the news, how they do it, and who checks for veracity.

The Rise of Citizen Journalists

A 2003 seminal report entitled “We Media”, defined citizen journalism as the concept of members of the public “playing an active role in the process of collecting, reporting, analyzing, and disseminating news and information.” To be sure, citizen journalism is a flawed term. Professional journalists are citizens too, and non-citizens are also included in the debate. I’m not interested in discussing issues of semantics though—there are bigger fish to fry.

With the rise of online journalism, barriers to entry in reporting have completely collapsed. JD Lasica classifies media for citizen journalism into the following 6 types: audience participation, independent news and information websites (ConsumerReports, The Drudge Report), full fledged participatory news sites (NowPublic, OhMyNews, DigitalJournal), collaborative and contributory media sites (Slashdot), other kinds of “thin media” (mailing lists, email newsletters), and personal broadcasting sites (KenRadio). We can disseminate knowledge with the click of a button to not just our friends but to a whole breadth of previously imaginable contacts. This sort of access gives the idea of “disseminating information” a new dimension—and puts it in the hands of new agents. 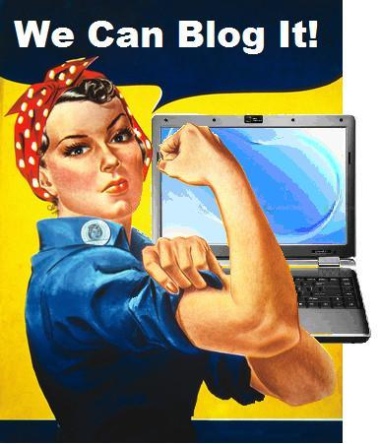 To paint a more concrete picture for you, on the one hand we have every self-proclaimed Matt Lauer or Katie Couric, pontificating, venting, broadcasting, divulging, transmitting, interfacing, editing, applauding, degrading, commenting, “liking”, tweeting and twatting from the comfort and privacy of their own (or probably their parents’) home, in others’ sites or in their own created blogs. On the other hand, there are the true over-achieving, multi-tasking David Lats and Steven Brills of the world, who initiate and conduct a public service by providing new channels of diversified information for more specified audiences, on the side of their everyday lives and careers. [And, at the very second I was going to move on to my next paragraph, I got an email from the Master of Pierson College, of course, informing us that he too has started a blog for his “hotlines.”]

What does this all mean? Journalism can no longer be defined by appealing to the medium (i.e., print, television, radio) or the basic notion of “disseminating information.” We need more concrete standards for distinguishing between the amateurs and professionals.

One way to peg down the legitimate reporters could be the “reasonable person standard”—who would we reasonably argue to be sharing news for the purposes of informing the public at large. This seems like the easy way out, so I’ll dig a little deeper. What factors constitute journalism? First, there is content. We could outline our standards based on whether the information reported is a matter of public concern and important for our understanding. This yardstick might put some entertainment sites in danger. Would Above the Law’s “Hotties Contest” qualify as public concern? Just about every article on Gawker might fail this standard [visiting the site for the first time, the first article I saw was “Kristen Stewart’s wild ‘thrusting’ almost ruined Twilight.” Interesting?] What about FAILblog of other funny blogs? Even if these subjects constitute “interest” for some people, just about everything might be interesting to someone.

Another factor we could consider is truth. Is the supposed “news” accountable and reliable? Has it been fact-checked? Again, entertainment and gossip sites might run into trouble with this standard. Moreover, it is questionable how much we can even trust printed news especially because nowadays, their sources come from the same place as the sources for blogs—Twitter and Facebook (as we saw in the Twittering the US Airways Plane Crash and the Notre Dame student articles).

Similar to truth, a third factor may be having an editor. Putting an intermediary between author and reader not only creates greater accountability, but also gives journalism the perquisite of an elevated discourse among intellectuals. It would imply that a certain degree of expertise is required in the news-reporting process and, most likely, an affiliation with a recognizable news entity.

None of these factors by themselves or even together, seem satisfactory. To me, the best way to define journalism would be by instituting an “intent” standard, similar to the one Georgetown Law student Laura Layton proposes. If your original intention was to gather news and present it in a manner that the public would acquire information then, congratulations, you’re a journalist.If your intention did not exist at the beginning of the news gathering process then it is a bit more questionable (see Von Bulow v. Von Bulow, 811 F.2d 136 2nd Cir. 1987). Sometimes you would not know that a story is in the making until after you acquire the information. In these cases, a more thorough analysis of the other factors, as well as the means and ends of the story are in order. In any case, we should err on defining too much as journalism as opposed to too little. As we saw several weeks ago, the 1st amendment is a sensitive issue that is best not messed with.

Again, I am not interested in matters of semantics. The way we define journalism is not important because having the title is just kind of cool, but because it comes with certain privileges. We cannot imagine the White House opening the doors of its press conferences to amateurs and professionals alike. Most notably, there is legislation designed to provide a news reporter with the right to refuse to testify as to information and/or sources of information obtained during the newsgathering and dissemination process—we call that “shield laws.” This is akin to the attorney/client confidentiality privilege or the doctor/patient privilege (although, maybe not for MJ’s doctor). The point of these laws is to encourage open communication so that reporters can better do their job of informing the public. 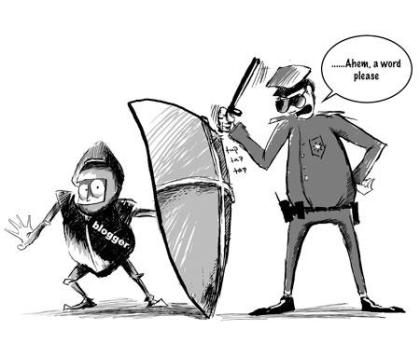 As of now, there is no federal shield law (despite a bi-partisan bill called the Free Flow of Information Act introduced in 2007 and passed by the House in 2008). [Friends at the YDN: Court’s have already found that student journalists are covered. You’re safe.] State shield laws vary in scope and Hawaii is the only state to specifically include whether bloggers are protected by shield laws. Their conditions hold that: (1) the individual invoking the privilege regularly participates in reporting or publishing news of significant public interest, (2) the person holds a position similar to a traditional journalist or newscaster, or (3) the public interest is served by extending the protection of the statue.

Why do we need to limit the scope of privilege at all though? Why can’t a shield law apply to all citizens if we can, seemingly, all report? Floyd Abrams stated, “If everybody’s entitled to the privilege, nobody will get it.” In other words, the court might be able to find counter-veiling social interest in almost all cases if Joe-blogger releases high priority information, ruining it for the rest of us. This is because the societal interest will almost certainly be greater than the interest of you expressing your personal thoughts and feelings on the Internet. Moreover, we see some natural limits in scope. If their skin is not in the game, so to speak, people can saying anything. If someone had ousted Valerie Plame Wilson on Facebook, they would almost certainly be required to disclose their source. They are not a journalist, just an idiot. This is where privacy and journalistic privileges might get a little fuzzy. But, to me the most important reason for limiting its scope, is to preserve some semblance of legitimate media. We need to (i) incentivize the open flow of information and new sources of media while (ii) maintaining the integrity of valuable news.

The following three cases better illustrate how this plays out in practice:

Extended protections to citizen reporters might further instigate the proliferation of these forms of journalism. This calls for a brief cost-benefit analysis. What could “bad” citizen journalism, or “good” for that matter, be hurting? 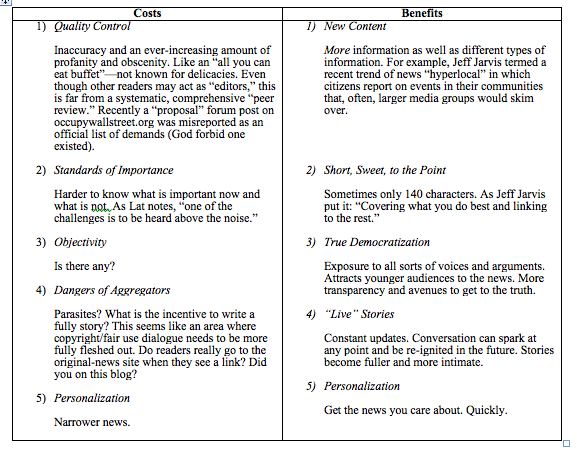 Citizen journalists are on the rise. We must implement some standards to both widen and regulate who is protected by certain journalistic privileges. Citizen journalism has costs and benefits. But it is possible to work on mediating the costs. Future challenges will include considering how to encourage better signal-to-noise ratios so that random comments—the ass lobster aficionados—do not drown out the substantive ones.

Increasingly, indicators of quality will matter. What will the peacock’s tail of journalism be? First, the ability to concentrate on analysis more than simply reporting stories. Second, enabling conversation around stories so that they truly become alive. And, third, differentiating products for particular audiences. I predict that soon new business models will emerge for both the blog-phobes (those overwhelmed by too much content) and blog-feens (those who want to participate). People will gravitate to communities they feel more comfortable in. Subscriptions will be introduced as the value of these connections and communities become more conspicuous.

Now, quick reality check: Only 1/8th of the total population get their main news source from the web. They make up about 2/3 of regular users and more than half of the readership of blogs. They dominate social network sites (see more statistics here). At the same time, there are 7 billion people in the world, and about 2 billion are Internet users, or a little over a 1/4th. So, if I’m doing my math correctly (and there is no guarantee that I am), we are talking about 1/32 or about 3% of the world’s population that read news on screens. Surprise? Not quite. If you believe the World Bank (I don’t), more than two billion people are poor—those would be hard-pressed to spend cash on Internet connections of any kind. My point is just that we have yet to fully realize the full potential of the web as a channel for news, whether those that fill the channels are professionals or not. Everyone, chill out—we still have time to figure out how to tailor online and citizen journalists, to help them be fair, accurate, and useful, before some catastrophic pre-mature demise of print news. 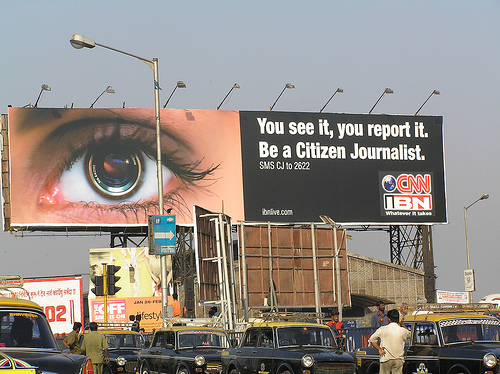