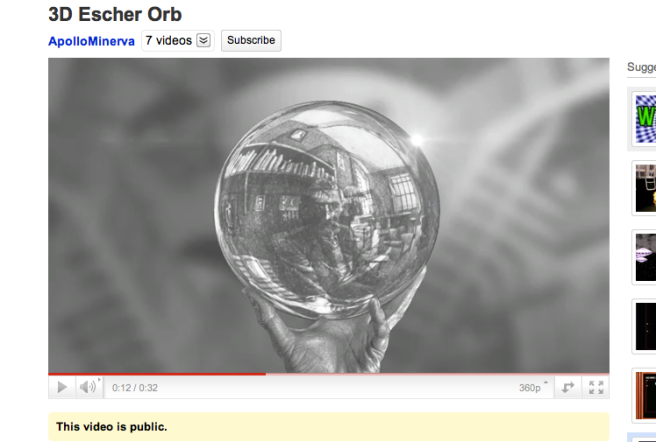 An undetermined number of months ago, I was browsing the internet as I often do, and I stumbled upon a pretty interesting ad for Samsung. While it may require a thick stomach toward some adolescent humor, it was very well done and even a bit inspirational.

Attack helicopters and uncomfortably misogynistic depiction of bosoms aside, I found myself fascinated by the technique of taking something traditionally two-dimensional and making it three-dimensional. I’d since been developing a sense of just how animation and special effects are done, and I never could shake that 3D image of the Girl with the Pearl Earring fighting secret agents, so I eventually I tried my own hand at doing what Samsung had done. It was a simpler take on the idea, with fewer models and no sound, but it’s an project I’d become quite proud of.

The piece it’s based on is M. C. Escher’s Hand with Reflecting Sphere*. This is unfortunate.

You see, there is a key difference between Hand with Reflecting Sphere, and the famous historical paintings featured in the Samsung ad. Hand with Reflecting Sphere wasn’t printed until 1935, which is well after January 1st, 1923. Thus, the piece wouldn’t conveniently turn out to be in the public domain. This was by no means my only encounter with copyright infringement. Oh, not even close! In high school I had made a music video for a song called Haitian Fight Song by Charles Mingus about two students fighting with trash pick-up sticks, and later on I’d make a reckless driving PSA using images and footage found entirely online without paying the rightful dues to their original author. Nevertheless, my teacher at the time, the wonderful Mrs. Gaulke, encouraged the infringements because for whatever reason, those images and that song brought about some creative impulse in me, and in her mindI was growing as an artist. Throughout the years I couldn’t separate myself as an artist wanting to create something new from myself as a spectator constantly influenced by the images and art around me, and the spectator in me would always try to gauge how exactly a certain song or image or reference could alter a film piece that I was working on.

Perhaps it’s my own lack of originality, or perhaps there are many other filmmakers like me that break copyright laws with the purpose of making something interesting and original. If the initial purpose behind copyright was to encourage creativity, then certainly any proposal for copyright reform should take a look at how modern filmmakers treat copyright.

Browsing various video uploading sites and video aggregator sites alike, it’s clear to find that copyright concerns are not highly regulated. There are plenty of montages of celebrity photos and clips ripped from television stations, but these are not the users that copyright laws were meant to encourage because these videos simply take another person’s work and recreating it. However, videos that take an artist’s work and recontextualize it so that it works towards an entirely new project don’t belong in the same category. Take Skyler Page, the mind behind Crater Face.

Skylar is an animator with very few short films to his name. For the most part, he has a series flipbook animations and silly live-action shorts about animating on his youtube channel, most of which only have a few hundred hits. He is by no means a large name, and it’s doubtful that he supports himself on his art. In other words, he’s in the same situation as so many aspiring filmmakers, yet he managed to create a deserved hit with the above video. Nevertheless, the video appears to infringe a copyright by using the Dan Deacon song Pink Batman, and for the purposes of this argument, we’ll assume that it does.

Hopefully one can understand that it’s the freedom of choice in selecting a song which allowed Skylar to experiment. By ignoring copyright, he was free to make precisely the video that he wanted. Now of course, no copyright reform would have allowed Skyler to use a song only three years old without paying some sort of royalties, but in an age in which it’s so simple to use another person’s copyrighted material it’s an inevitable fact that artists will use others material. Regardless of the current, past, or future legality, the appeal of this freedom of choice is impossible to ignore for anyone that calls him or herself an artist.

Current copyright legislation seems to see this current culture of misuse as a growing threat, and reform is targeting the same mentality that I just deemed to be inevitable. Rather I believe copyright reform should do more to understand the usefulness of this freedom of choice. Whether or not that means increasing the number of works in the public domain as proposed with the Public Domain Enhancement Act or lessening the gravity of the proposed punishments for copyright infringements it doesn’t so much matter because there will inevitably be people breaking the law regardless of how it’s reformed. Although if there copyright reform allowed for my three-dimensional M. C. Escher Orb to live in its hole of the internet without fear of a takedown notice, that’d be just fine by me.